Can We Just Admit That Sometimes Motherhood Really Sucks?

Yes , we love them. And even on the worst days we wouldn’t trade them for the world. But being a mom can be an overwhelming task that no one prepares you for. On those days you’re not a bad mom if you admit to yourself that motherhood sucks. Who knows, you might even help another mom if you admit it to her too.

Ever had one of those sucky motherhood days when your kids are driving you crazy and you’re wondering why you wanted to be a mother in the first place?

So while you’re questioning your sanity about choosing the motherhood route it hits you that you didn’t even have sense to stop with one child. No….you had to go ahead and do it again (and again, in my case). You figure you’ll never get these kids out of the house so that you can get your life back.

Whether your days are filled with diapers or driving lessons, tantrums or teenagers, there are some days when being a mom just is not fun.

Who are we kidding? There are days when you literally ask yourself, “What the heck was I thinking??? Who in their right mind would choose to do this!”

And  just as those thoughts are running through your head,  some other mother smiles and makes some condescending remark about the joys of motherhood and how “blessed” you are – and you just want to scream! Or slap her (or maybe that was just me).

Don’t you just hate that mom?

Related Post: 5 Strategies When Mom Needs A Time Out

The truth is that motherhood can suck – a lot. It’s just that no one wants to admit it. Because admitting that we’re not enjoying motherhood – or enjoying our kids – makes us feel like failures. Anyone who says otherwise isn’t being honest with themselves (or the rest of us).

Because, honestly, there are lots of things about motherhood that just flat out suck:

These are just some of the pleasures of motherhood.  No wonder no one wants to own up to these little “adjustments” you have to make once you become a parent.

But here’s the real kicker:

Even though sometimes we’ll laugh and admit that we don’t enjoy some of the more “pesky” aspects of motherhood (you know, the ones that are socially acceptable to fess up to), there are deeper aspects that most of us are truly reluctant to admit because they’re the ones that make us feel like  Really Bad Moms (which translates into feeling like a total failure as a woman).

Some aspects of motherhood that we don’t often admit:

I used to hear a saying that struck me as funny,

“Your friends can get you pregnant faster than your husband can.”

Okay, not literally perhaps, but there is a lot to be said about the pressure we feel from our friends, our own parents, and society in general. Whether we like it or  not there is still an assumption that women will become want to become mothers (because it’s such fun, right?).

But not every woman feels called to motherhood. Some women would rather have a dog – and they wish the rest of the world would quit telling them they’ll change their mind. And while some may not want to admit it, there are lots of women who give in to the pressure and have kids and then just make the best of it.

This doesn’t mean they don’t love their kids once they’re born or that they’re bad mothers, but they may not feel that motherhood was their greatest – or strongest – calling in life.

There’s nothing wrong with loving your role as a mother. I know women who are perfectly happy to be defined simply as “Johnny’s mother”. And if that’s you – then great. You probably can quit reading now.

But how many of you noticed that from the time you announced your pregnancy, your own identity somehow  began to take a back seat. Once you gave birth, it got even worse. People now referred to you as “so-and-so’s mom”. Heck, I even noticed that from the time my first one was born, my own parents were more anxious to see their grandchild than they were to see me. That’s not sour grapes (honestly), but it an accurate observation.

And once your child gets in school it’s even worse. You’ll be introduced to other parents simply as your child’s mother – it’s like you cease to have a name of your own.

And let’s face it – we all laugh about it. We probably even begin to start introducing ourselves the same way. “Hi, I”m Johnny’s mom.“

Your education or professional status even takes a backseat to your new status as a mother too. You may be a PhD or running a multi-million dollar business, but from now on you’re known more as a mom than for any other role you may have.

Maybe it’s  not a big deal, but at some point I think we begin to want our own identity back.

We may not enjoy every phase our kids go through. In fact, some phases we downright dislike!

Childhood phases are not all created equal. Some women enjoy certain stages more than others.

My own mother enjoyed the years when my brother and I were tweens and teens. She found that stage of development interesting and she’d despised the small baby stage.

As for me…I wanted to run away from home during those years just to escape the teenagers I’d brought into the world.

But to be honest, I didn’t love the infant stage either. All three of them were difficult babies. They had colic, ear infections, didn’t sleep well , and I felt like a zombie for months after each of them was born.

When everyone was healthy and rested, life was good. When they didn’t feel good and we were all sleep deprived,  we were all a hot mess because of it.

(You may be wondering if I liked my kids at any phase. I did. From about 1 year to around 12 years old they were adorable. And then those teen years got started and life with the kids had its share of difficulties.)

We worry (a lot!) about whether we’re the cause of our kids problems

This is one that most of us don’t talk about freely – or at all.

But sometimes our kids have problems that are serious. And deep down, we worry and wonder if we’re the reason they have those problems.

Are they acting out because we haven’t given them enough attention?

Do they underachieve in school because we’ve put unrealistic demands on them?

Is their behavior a sign of a more serious problems, or is it just a phase?

If we DO talk about these issues, it’s only going to be with our absolute best friend (you know the one – she doesn’t judge and would submit to Chinese water torture before she’d ever reveal your secret). Because some issues and problems make us worry all the way down to our bones.

But keeping these things to ourselves just makes us worry even more. Even though sometimes we don’t WANT to talk about things our kids are going through, sometimes we NEED to. You never know what help another mother can provide. I’m not sure there’s a mom out there who wouldn’t be better off if she could get rid of her “mom guilt“.

Lots of us had goals that had nothing to do with raising kids. And we pursued them. But if you’re a mom then you’ve definitely made sacrifices in your career so that you could do what was needed for your kids.

Now I’m not saying that is a bad thing. But sometimes it stings.

Whether you’ve missed a promotion or other opportunity or have settled for a lesser role until your kids were older, the point is that you’ve likely given up some of your own personal and professional goals so that you could put your kid’s needs first (because that’s what moms do). But sometimes you question how much of yourself you’re giving away and giving up because eventually they will grow up and leave home. Should you give up all of your dreams until they do?

Does motherhood have to suck AND force you to give up your dreams?

Sometimes even though we love our kids, we don’t always like them

You read that right…sometimes we don’t like our kids.

What we really don’t like is their behavior, or the developmental stage they’re currently in. Admitting that we don’t like something about our kids does not make us bad mothers.

It simply makes us honest.

So let’s just agree just between us, that we’re going to admit that this motherhood thing isn’t all cuddles and cupcakes. While we’re at it, can we go ahead and admit that sometimes we hate those moms who make us feel inferior for not loving every minute of it?

I’d even suggest that we go one step farther and admit that sometimes we even hate (or at least resent) our  own moms for encouraging us to have kids. Shouldn’t they have at least warned us what we were getting in to! And waiting until after we’ve given birth to say things like, “You’re paying for your raising” (while they smile or laugh) does not count! After all, it’s too late to reconsider or change our minds now.

So thanks, Mom – those words really don’t help. Although it does make me feel like you suckered me into giving you grandchildren as a sort of payback. (Hmm, I wonder if that was the motivation?)

Here are some things I’d like to see moms do

Here are (a few of) my motherhood confessions:

But as a result of my motherhood imperfections, my kids are independent, competent, confident, and likeable. The point is not that I was a wonderful mother despite my shortcomings.

The point is that even though you may be having motherhood doubts and worrying about whether you’re doing it “right”…  your kids are going to turn out just fine too. Besides that “it takes a village” thing comes into play once they are in school and out in the world.

But even knowing that it will turn out all right in the end, I don’t think we do ourselves – or anyone else – any good by denying that sometimes this whole motherhood thing sucks….big time.

So, what part of motherhood was the most “sucky” for you? 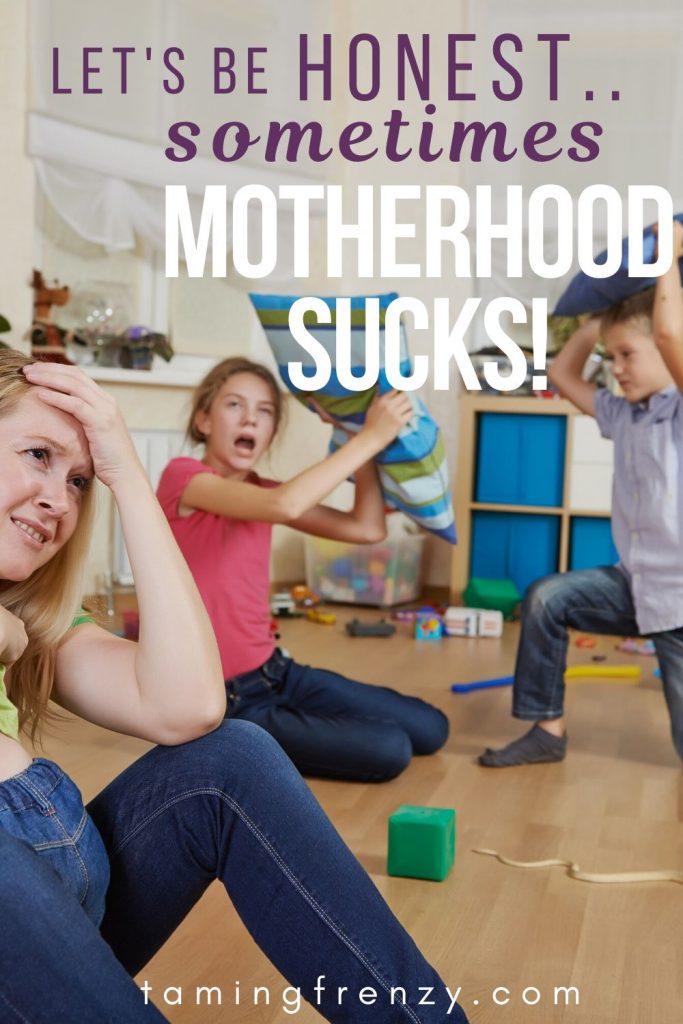 8 Benefits Of Spring Cleaning
Next Post: 5 Strategies When Mommy Needs A Time Out