How To Prevent Kitchen Fires & Burns

As busy women one of our biggest worries is keeping ourselves and our family safe. While accidents can happen anywhere, they’re unfortunately an all too common occurrence in the home. There are steps we can take, though, to make our kitchens safer and protect ourselves and our families from kitchen fires and burns.

When you’re moving into a new apartment or home, probably one of the last things on your mind is preparing for an emergency. After all, it’s more exciting to think about decor, your new life, and the things you want to acquire to make your space your own.

Thinking about the possibility of a kitchen fire most likely isn’t on your mind.

Not too long ago we were helping our daughter move out of her college apartment and into a new apartment that was truly hers. That meant all the excitement of moving day and setting up a new home where she got to make the choices, pick out things she liked, and set things up just the way she wanted.

We made a major shopping trip to one of the big box stores to get items she needed to set up housekeeping on her own. It was an expensive day because she had a list…and so did I.

As we’re choosing this blender and that slow cooker, there was an item on the list that she hadn’t thought of. And that was a fire extinguisher.

She’d pretty much forgotten about the kitchen  fire we had when she was young.

I still remember the day very clearly. I had been to the hospital earlier in the day for a minor procedure. Hubby had left the house to pick up our younger two kids from Vacation Bible School at our church leaving only my oldest son and me at home.

I remember my son coming into the office where I was playing solitaire on the computer and asking if I was making popcorn because he thought he smelled it burning. He walked on towards the kitchen (I can hardly believe I didn’t get up and go with him since he’d mentioned a burning smell, but hey, I was still partially medicated). Within just a minute he came running back in to tell me that there was smoke coming out of the dryer.

I jumped up and ran to the kitchen. Stupidly, I yanked open the dryer door and when I did …whoosh!

Immediately, flames poured out of the dryer. I slammed the door shut but it was too late. The damage was done.

It’s astounding how fast a room fills up with smoke!

I immediately told my son to take the phone outside and call 911 to report the fire. I began searching for the fire extinguisher that I’d insisted HAD to be mounted on the wall of the garage because it was too ugly to be mounted in the kitchen where it would be closer to the stove or washer and dryer.

Boy was I regretting that decision now!

You wouldn’t think that a room can fill up with smoke in mere seconds, but it can. Before I could even cross the kitchen to get to the garage door the smoke was getting to the point where I couldn’t breathe and couldn’t see.

There was no choice but to turn around and get out of the house.

Fortunately, the local fire department was having a practice when our son’s call was answered. They were at our house within minutes. I remember standing on the corner across the street, thankful that everyone was out of the house, and not really caring much about anything burning on the inside.

It’s funny how life gets put into perspective during moments like that.

We were very lucky. We did lose possessions but it was minimal. The point of the story is that I was old enough at the time to have known better. But instead, I used the same excuses I’ve heard others make: that the fire extinguisher was ugly and I didn’t want it “messing up” my pretty kitchen decor.

Fortunately, once she was remembered our experience the fire extinguisher wasn’t an issue any more.

So why do people put off putting a fire extinguisher in or near the kitchen?

There’s a natural tendency to not think about the bad stuff that could happen. It’s unpleasant and it’s easy to assume that “those things” happen to other people. So we make excuses and put off investing the money in something that we know we should purchase and learn to use.

Perhaps you’ve used one of these excuses yourself:

Yep, I said the same things.

But here’s the deal…all of those things can be true, and you can still end up needing one anyway. And when it comes to fire – better safe than sorry.

According to the National Fire Prevention Association, kitchen fires kill an average of 40 people every year, injure 5,400 more, and cause 1.1 billion dollars in property damage.

The thing that we don’t always realize until it’s too late is just how fast a fire gets started, and how fast it spreads. 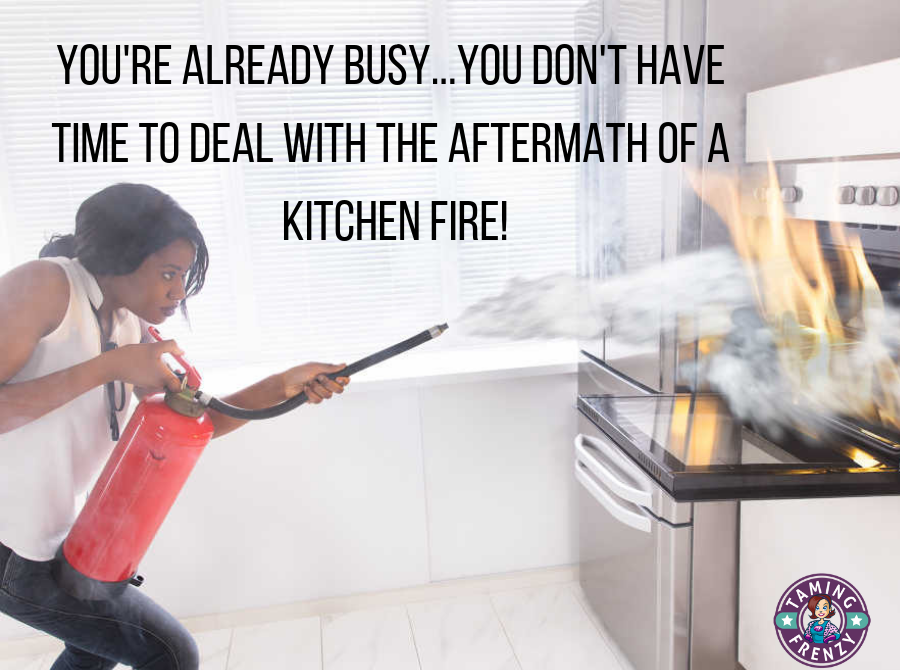 While our kitchen fire started because of a faulty dryer, it got me thinking about how dangerous a kitchen can be and how easy it is for someone to either get burned or to accidentally start a fire.

So here are some tips to help prevent fires and burns in your own kitchen:

Okay, I’m going to go out on a limb and risk making some people mad but I just have to comment on something I keep seeing.

These handy baby carriers that keep your baby snuggles up against your chest – they’re sweet and wonderful. But they don’t belong in the kitchen! I’ve seen several photos and videos where mom has the sweetest little baby snugged up tight sleeping against her while she cooks. The baby’s cute chubby little legs are danging – and she’s frying chicken (or whatever)!

I know, I’m sticking my nose in where you might not think it belongs. But folks, this is a recipe for disaster! During my years in schools I had several students who had suffered very severe grease burns. I’ve seen firsthand what grease burns can do and I’d be remiss if I didn’t say something. So keep that precious little baby away from the stove where they’re safe from harm.

Finally, in case of a kitchen fire….get everyone out of the house! Don’t do what I did (which was stupid!) and try to play fireman. Exit your home and call 911.

Obviously, preventing a kitchen fire or a bad burn in your goal. But since you never know what emergency might occur, be sure to have a couple of fire extinguishers in your home.

The takeaway is this – YOU’LL WISH FOR THAT FIRE EXTINGUISHER TO BE CLOSE BY IF YOU EVER NEED IT!

Now, I hope that you never find yourself in the situation of needing it in the first place. But life can change in an instant and you never know what’s around the corner.

I thought about how different the outcome might have been if all of my children had been home. What if the fire had started during the night? What if the fire department hadn’t been able to respond as quickly? And I swore right there on that street corner that I wouldn’t ever come up with a reason not to have a fire extinguisher close and handy ever again.

It’s easy to give yourself a little peace of mind. However you choose to get one into your house, please do so – for your sake and for your family. It’s easy –

After all, red is a pretty color. It sure beats charred black.

to help prevent kitchen fires and protect your valuables

First, make sure you have the proper safety equipment to help you detect and deal with a fire should one occur.

Second, make sure you’ve discussed exactly what anyone living in your home should do in case of a fire. During the middle of an emergency is not the time to wish you’d put a plan in place or had the discussion.

Accidents can happen faster than any of us realize. It’s worth whatever extra minutes we spend in the kitchen taking steps to prevent them.

The Easiest Cherry Cheesecake Recipe Ever!
Next Post: How To Get Organized: Tips From Your Favorite Storybook Characters