7 Reasons You Absolutely, Positively Must Get Organized!

You’ve probably heard that you should get organized. You see it on TV, you read about it in magazines, books, and blog posts, and it’s likely that someone has told you to straight to your face that it’s time to get it together. But is getting – and being – organized really that important? Here are seven major benefits you’ll reap when you get your house, home, and life organized.

You’ll save time by getting organized

The time you lose to disorganization is often an aspect people don’t think much about. Kind of like the walls, it’s just something that’s part of daily life. You lose a few minutes here, you waste a little time there….it’s just part of the way your family operates, right?

But how we spend our time is how we spend our life. And if we’re wasting much of our time…well, you get the idea. No one wants to admit that a lot of our life is wasted because we’re losing time on things that shouldn’t take much time at all.

You probably don’t even realize how much time you lose when your home is disorganized. But if you start to think about it it’s probably a lot.

If you’re unsure whether you waste time then ask yourself these questions:

Those are all examples where time is spent backtracking, playing hide and seek with your belongings and your memory.

But there are other ways that your time is wasted because you’re disorganized.

All these little things that we think are just part of life do add up when you begin to look at the pattern.

The good news is that once you get organized you’ll start reclaiming that time!

Some ways you’ll save time

Here are some other ways that getting organized will save time.

You’ll save money once you get organized

Most of us don’t enjoy wasting money for no reason. While it’s one thing to purposely decide on a purchase, to simply have your money trickle through your fingers like it was water going down the drain does you no good. You end up with nothing to show for the money you’ve spend. Boo!

Even if you don’t equate disorganization with wasted money, there is a correlation.

When we – or our homes – are disorganized it costs us money. Items get buried, lost, misplaced, and then we’re off to the store to open our wallet to pay for a replacement. Or items get torn up because our storage systems are such a mess that things aren’t stored and kept properly. 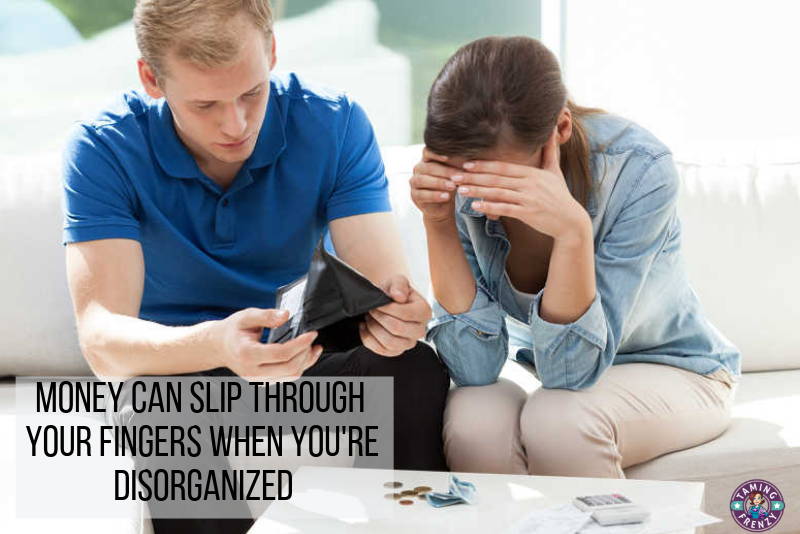 And a huge problem with all this waste is the conflict it causes in the family. We all know that money issues cause lots of stress in relationships. Hubby is upset because the bills weren’t paid on time. You’re frustrated because you can’t seem to get a handle on it.

The problem isn’t the money…it’s the disorganization that causes it to be wasted.

Do you often feel like you’re the only one in the house who knows where things belong? Does everyone in the family holler, “Mom, where’s my….?”

You’re not alone. Probably every mom has felt like they were the lone keeper of the household inventory at some point. But there’s no reason it needs to stay this way. Getting your house organized means that things have a place to live. And once items have a “home” then everyone in the house will know  (or should know) where things belong and can put things away.

They’re more independent and you’re less frustrated because you’re no longer the only one who can find, and return, items.

You have less stress when you’re organized

Here’s a fact: being unorganized and living in chaos is stressful.

For you, and for everyone else in your home.

And living with long-term stress is not good for your mind or body. When your body is experiencing stress, high levels of the stress hormones are released into your blood stream It’s like you’re living in a constant state of “fight or flight” with no relief and all of the damage.

So ask yourself if you could use a little less of any of the following:

If  you answered yes to any of these then any change you make that positively affects your organization will pay off in terms of reduced stress.

Reducing your stress is a lot cheaper than therapy or a trip to the spa…and it benefits everyone in the house as well.

If I had a nickel for every argument I’ve listened to because my kids were bickering over who had to do what chores, I’d be a rich woman today. Even though our kids would like to think that keeping a house clean and organized is just mom’s job, the truth is that it takes everyone pitching in together.

I’ve said before, “Mom isn’t the only one who lives here.”

But kids often plead ignorance and suddenly go hard of hearing when they’re told to do chores.

So it’s easier not to tell them.

Instead, keep a written chore chart on the refrigerator or family bulletin board so that there’s no question about who is supposed to do what. If they can read, they know what chore they’re assigned to do. And there is no “I didn’t hear you” or “I forgot” because every member of the house knows where the chore chart is kept. No excuses allowed (even from hubby!).

If your kids are older then it may be easier to set up the chore chart on cozi.com and have them get a text message when it’s time to get a chore done. Most teens are glued to their phones anyway, why not make that technology work for you? They get a non-screaming reminder about what needs to get done, and you don’t have to come off as a nag.


An organized home is a happier home

And here’s the other thing about an organized home…when people aren’t arguing, everyone is happier.

Have you ever noticed that when people aren’t arguing over who needs to take out the trash or where the TV remote is that the atmosphere in the whole house seems to be taken down a notch? An organized home is less chaotic and therefore it makes everyone calmer, more subdued and laid back, and the whole house is more peaceful.

This happy feeling at home pays off in lots of ways. But one major way it pays off is with the benefit your kids get. Kids who grow up in a chaotic home have more difficulty in school and often suffer from learning gaps. It’s funny because there’s definitely a repeating circle here. Home life gets more organized and less chaotic so your child does better at school. Then since your child is doing better at school there’s less bickering and upset when he gets home.

Do everyone a favor…start getting things in order and organized.

Once you cut down on the time you spend looking for things, doing things over, putting out fires caused from the disorganization in your house, and refereeing arguments, you’ll find that you finally have time to do some of those things that are you your list – that you (and your family) actually enjoy!

All that time that used to be squandered is now freed up and you’re the beneficiary. Well, your family benefits too, but mom is probably the happiest beneficiary in the group.

If that isn’t reason enough to get organized, I don’t know what is.

So, are you convinced yet? Getting organized has lots of benefits for both you and your family. If you need more help getting organized and taming your frenzy, be sure to sign up for the weekly newsletter. There’s no reason for frenzy to be in control! 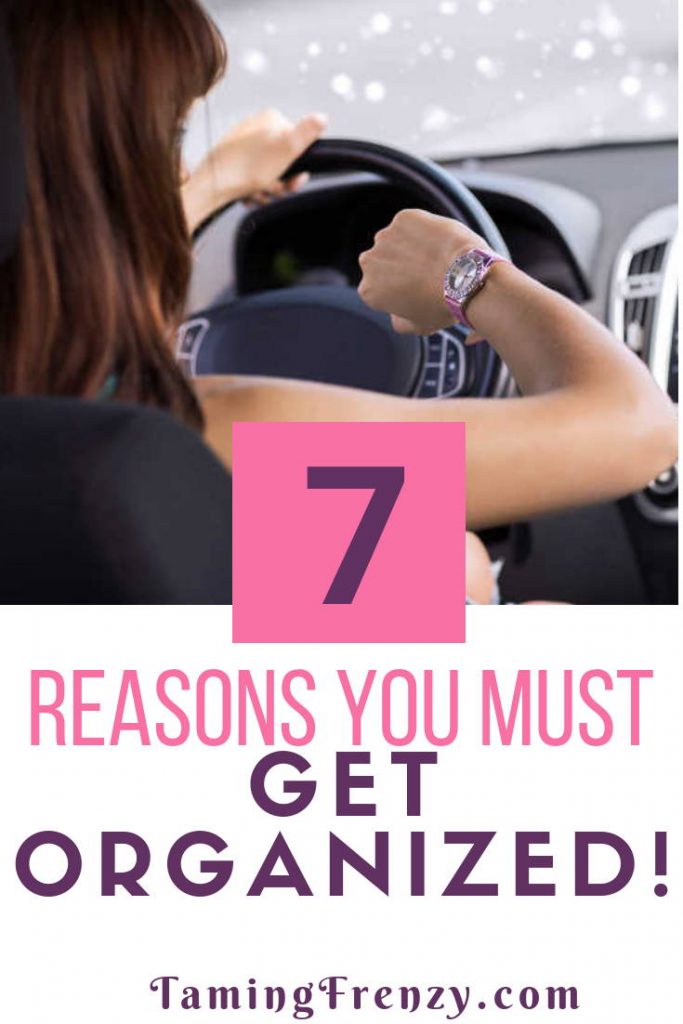 The Best Jewelry Storage Ideas To Preserve Your Treasures
Next Post: Inexpensive Gifts Mom Will Love