11 Rules Teach You How To Have A Happy Marriage

No one says “I do” thinking their marriage will be anything but blissful. But marriage takes work and it’s not always easy. Fortunately, advice from other long-married couples can teach you how to have a happy marriage. 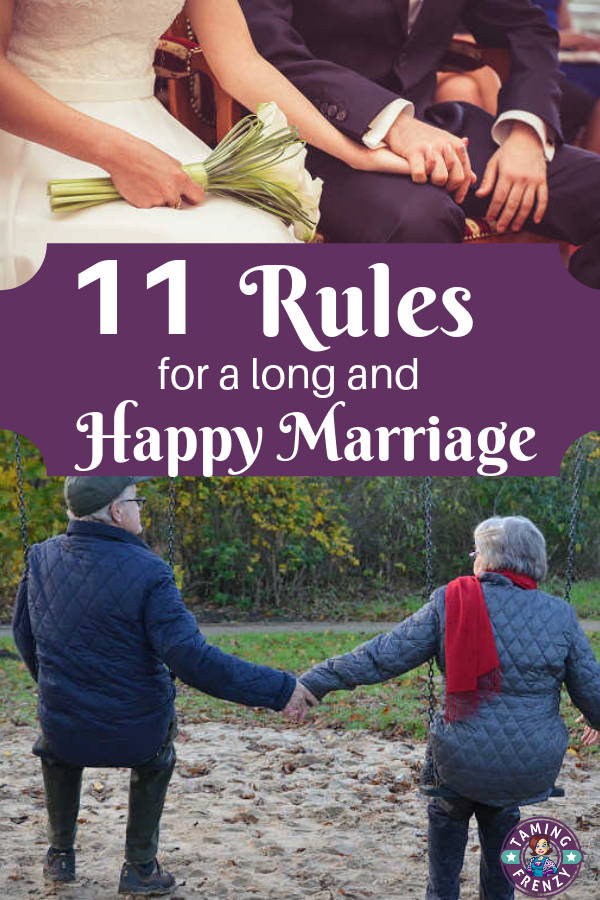 It’s a sad fact of life that anyone can get married. However, staying married – or staying happily married – is much harder. But it’s probably also true that a happy marriage is what most of us are dreaming of and want to achieve.

Now I’ve observed a lot of marriages over the years. Some were good, some were great, and some left you thinking, “Do they just enjoy making each other miserable?” So in this post I’m going to get very blunt and pass on some things I’ve learned and some things I’ve seen.

Here is the advice I’d give my own kids or my best friend.

How to have a happy marriage

1. Don’t run home and tell your parents everything your hubby does that makes you angry. Don’t tell them when you’ve had a fight or when he’s hurt your feelings. The reason is this: you will forgive your hubby because you love him. But it won’t work that way for your parents. Long after you’ve moved on and gotten past the incident, it will still bother your parents.

Think about it – they don’t feel the same way about him that you do. In their minds he’ll continue to be the man who upset their daughter, who hurt her feelings or made her cry. By running home to get sympathy, you end up creating a gulf between your parent’s ideal son-in-law and the one they actually have. You also create a situation for your husband in which he’s always suspect from then on. Nothing he can do will be good enough for your parents to completely get past the hurt you said he caused you. It’s a no-win situation for both your husband AND your parents.

So grow up and deal with your marital issues at home. If you must talk to someone about what a jerk your hubby was to you, find someone other than mom and dad to talk to – perhaps a girlfriend who isn’t one of your couple friends . But the best course of action is to keep other people out of your marriage.

2. Don’t go talking about the specifics of your sex life with mom or anyone else. It’s one thing to talk about sex in a general way – ways to make things better, etc. But no specifics. When you get to the point of discussing physical characteristics or “he likes this or that” then you’ve given out WAY too much information.

To change perspective for a minute – how would you like it if he was having the same discussion with someone else about you? If you wouldn’t be happy about him having the same conversation, then you don’t need to be having it either. Zip your lip and keep your private life private.

Other people don’t need to be in the bedroom with you so shut the door and keep it shut.

3. Only talk positively about your hubby. Some women have fallen into the trap of running down men – including their husbands –  thinking it’s funny. It’s not. No one likes to be portrayed negatively or to be the butt of jokes. Your hubby may not tell you he doesn’t like it, but I’ll tell you — He doesn’t like it!

If you want to make your girlfriends laugh, tell a knock-knock joke. If you want to talk about your hubby, talk about what a great guy he is. You married him thinking he was great so be sure the world knows it.

The flip side to this is that talking negatively about your hubby makes others uncomfortable. They may not call you on it, but your husband’s friends and family don’t appreciate him being run down or made to look like an idiot.

Frankly, the one who ends up looking the worst in this situation is YOU. 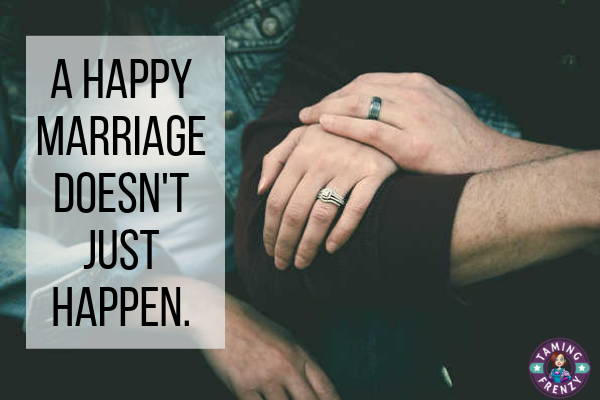 4. Realize that he doesn’t read your mind. You have to tell him what you want, think, and feel. That wedding ring didn’t give him super powers.

Lots of women assume that “he should know what I’m thinking or feeling.” I’ll admit that I spent some years thinking this too. It simply led to hard feelings on both sides. I’d wonder why he didn’t make things better since he “knew” what was wrong, and he’d be scratching his head wondering, “What the heck is the problem?”

Marriage only works when you talk to each other.

5. Your spouse is not your personal punching bag. I’m not talking about a literal punching bag, but the emotional kind. Too often people decide, “Well, he’s married to me so he’s got to put up with me.” Nonsense! A marriage license doesn’t give you permission to be a witch all the time.

We all need to remember that no one likes to be treated poorly, spoken to harshly, belittled, etc. Just because he’s your husband doesn’t mean that he HAS to put up with it.

And it might be good for women to remember that just because they found a husband doesn’t mean they can’t lose a husband too. If you’re not nice to him, someone else will be.

6. Along the same lines, a ring on your finger doesn’t give you carte blanche to run around looking like a complete slob and a schlumpadinka (I’m not sure if that’s a word but you get the idea). I’ve actually heard women say, “Well, he knew what I looked like when he married me!” I’m not advocating that we must look like beauty queens (because goodness knows I don’t), but I bet that you made an effort to look nice for him when you were dating (and you know you did).

What makes you think that he wouldn’t appreciate some of the same effort now?

7. Let your spouse have some space. You didn’t become joined at the hip when you got married. This means you don’t have to share every interest and hobby. You don’t need to tag along every time he goes somewhere. You don’t need to listen to every conversation he has.

I’m making the assumption here that you married a decent guy – now treat him like one. Don’t treat him like he’s done something wrong when he hasn’t.

And if you’re worried about every move he makes when he’s done nothing to deserve it, then YOU are the problem. Likewise, don’t expect him to tag along with you to everything. For Pete’s sake, find a girlfriend to do things with some of the time.

8. Sometimes what the other person is going through is not about you. Don’t compound their issue by adding yours to it. When you’re constantly asking, “Did I do something?” you’re assuming that you’re the only thing that might cause him worry. I hate to burst your bubble, but you’re not.

Our husbands have moods just like we do. They have things they worry about. Whether it’s work, money, their own parents, or the state of the world, every mood and concern is not about you.

9. Marriage is not always hearts and flowers. There are times you will ask yourself, “What the hell was I thinking?” Every relationship experiences the natural ups and downs of life.  Don’t give up during these times because you’ll get past them.

10. My parents had a system. Whoever cared most about a particular issue got to make the decision. This seems like a fair way to split things up. This way neither party is making all of the decisions. I know women who will say, “I never get a say, he always decides.” In these situations, one of two things is going on. They’ve either married a first class jerk, or they’re blind to the times that they get what they want (or they’re trying to paint themselves as the eternally wounded party).

11.It’s not your spouse’s job to MAKE you happy. That’s your job. Your partner can add to your happiness, but no one else is responsible for creating your happiness and it’s an unfair expectation to place on someone else in the first place.

A lot of women buy into the idea of Prince Charming and “happily ever after.” I’m here to tell you that buying into that fairy tale is probably the cause of more marital disharmony than anything else.

Your guy may be your Prince Charming, but he’s not perfect.  But here’s the catch – neither are you! If you expect him to make you happy, you’re going to be disappointed (and I would add that you need to grow up).

The bottom line on how to have a happy marriage

6 Reasons You Must Continue To Date Your Spouse
Next Post: Popeye’s Surprise: Pasta, Sausage, & Spinach Dinner